In 2008, a small group of patients at London’s Royal Marsden were being treated for gastrointestinal problems resulting from radiotherapy to the pelvic region. Under the guidance of Dr Jervoise Andreyev, Consultant Gastroenterologist in Pelvic Radiation Disease at the Royal Marsden, Chelsea, they formed an informal group, in order to share their experiences and offer each other support.

Through word of mouth and distribution of printed material, a significant number of people came forward to attend support meetings and keynote talks given by specialists in the field of pelvic radiation injury, and it quickly became apparent that there is a large number of cancer patients throughout the UK suffering from the unpleasant and isolating symptoms of radiation induced pelvic injury, for whom there is little or no medical or peer support.

In 2010 the association took on a more structured form, with regular planning committee meetings that included medical advisors.  It’s reach has grown significantly, with supporters throughout the UK and interest from as far afield as the USA , Spain and Scandanavia.

In 2012 the Association became a registered charity, No. 1147802. We are now a significant voice within the cancer community, speaking at and attending major national and regional conferences, workshops and forums. 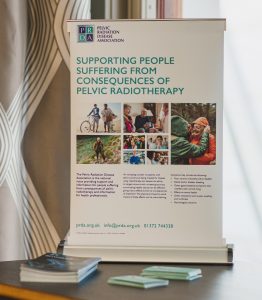