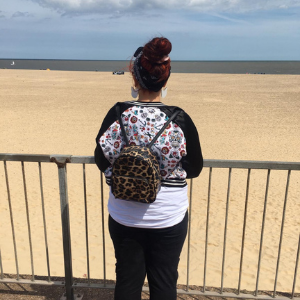 I was treated for stage 2b cervical cancer in 2015. I had 6 sessions of chemotherapy and 28 radiotherapy sessions and 3 brachytherapy sessions at the end. No one tells you what the radiation damage could be.

Being told I couldn’t have children it made me cry, but I am fine about it now. At the time I wasn’t sure if I wanted children. I was sent for a test to see if my eggs could be frozen but because of where the cancer was, they said that if they put the needle into me to get the eggs that it could cause the cancer to grow even quicker before my treatment got started, so I said no.

I had never heard of PRD but a few months after my treatment finished, I started getting lots of bleeding from my bowel. That freaked me out because I thought I was getting the cancer again and then I started getting bleeding from my bladder. I had my bladder cauterised to try and stop the bleeding and after that I decided to google things to see what was going on. That is how I heard of PRD. Then it all started to make sense. PRD was never mentioned by the hospital.

The bladder side of things just got worse and worse. I had laser treatment a few times and then I had sepsis because of a blockage from my kidney to my bladder and that was horrific. After that I got put through Hyperbaric Oxygen Therapy treatment for 6 weeks. The HBOT (hyperbaric oxygen therapy) was quite strange because it’s like you are going diving in a submarine! You go into a big tank, and you have to have your eyes and ears tested first. You get fitted with an oxygen mask. I think there were 4 other people in there and they change the air pressure, so it feels as though you are going underwater. It’s supposed to get the oxygen into your body to help heal wherever the damage is. You have a break halfway through and have a drink and a biscuit and then you carry on and then at the end they bring you back up. It’s strange and uncomfortable and long – but you can take things to read and the nurse talks to you a lot. For me it didn’t seem to help, but it was worth trying. It was my oncologist who referred me for the treatment for the bleeding from the bladder. It’s not a common treatment and it took me awhile to get it.

That didn’t seem to stop the bleeding which was frustrating and then I had sepsis again and I ended up with my bladder not doing anything – it was full, but nothing was coming out and I was in agony, so I had to have a catheter and then finally I had a urostomy operation and since that operation my right kidney has stopped working so I only have one kidney.

PRD is constantly on my mind, and I am constantly worrying about things I need to do when I go out and pre plan things a bit more. And the constant worry about what is going to go wrong with my health next. I am never just worry free at any point.

It’s been really hard over the years but the operation for the stoma that has been a massive life changer in a positive way. For years I would spend hours on the sofa lying down exhausted because of the way my bowels were reacting and with the bladder it got to the point where I was going to the toilet up to 3 times an hour because I was worried I would have accidents. But now that is relieved because of the stoma. I also have a disabled toilet key in case I need to change my stoma.

But even then, at Christmas this year I went to visit my family and we were sat round the table eating and my stoma bag started leaking everywhere. That is not something I thought would happen to me and all that has just come from the treatment that I had to save my life which is really mad to think about.

Sexual relations is something I don’t publicly talk about but it is physically impossible now. I have a lot of scarring and the scarring has now binded itself together. After my cancer treatment finished they gave me dilators and that was horrible. They give you these solid plastic things that I just can’t see how anyone can get on with.  It didn’t help at all and then I had an operation to essentially cut it open and it was agony. So it’s stuck like that now. I try not to think about it too much. As a couple we try not to think about it. I wish there was more they could do about that. I don’t think anyone really understands that I can’t “do it” ever again.

I found PRDA through google but when I came across it I though “oh my god thank goodness”. I had been trying to find other people who had similar things. I joined the online community and newsletter and follow PRDA on Facebook and Instagram. I raised some money through a Facebook birthday fundraiser and now on Amazon I use the “Smile” option, where you can choose a charity and when you buy things some money is donated. Finding PRDA has given me comfort knowing I am not the only one going through this.

To anyone else who is going through this I would advise you to try and talk about it as much as you can. If you haven’t spoken to your doctor, make sure you do and get them to refer you to someone to sort out the issues. Don’t leave it, because the symptoms can get a lot worse. If you can join any groups online and speak to others, then that’s really helpful. Try and have those conversations.